Phil Hunt of Rylander and Associates PC answers the question, is software still patentable in light of the recent court ruling in his Vancouver Business Journal article.
Posted by Unknown at 11:23 AM No comments: 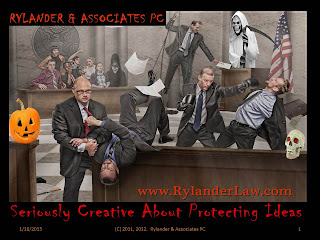 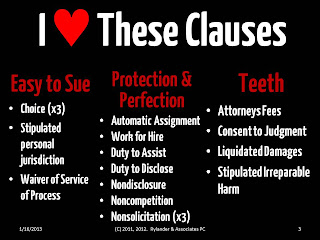 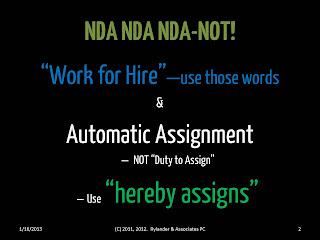 Posted by Unknown at 4:12 PM No comments:

Top Ten Most Common IP Mistakes by Companies and Entrepreneurs 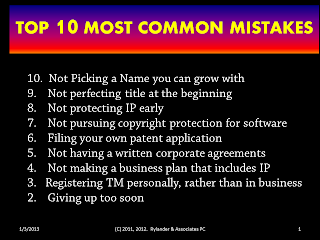 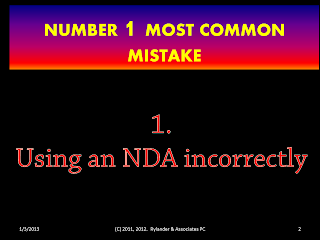 
President Obama signed the Leahy-Smith America Invents Act ("2011 AIA") into law on September 16, 2011, making the largest change to patent law in half a century. The last whole sale change to patent law was the 1952 Patent Act. That act provided for the one year statutory bar related to inventions on sale, printed publications, and public use--also known as the one year grace period.

The 2011 AIA states in pertinent part that there is NO grace period with a highly complicated, and currently un-interpreted, exception:

This “exception” to an exception inserts a lot of ambiguity into the one year grace period. What is the difference between “the disclosure”, the “claimed invention” and “the subject matter disclosed”? What is a “public disclosure”? What does it mean that the disclosure can be “by another who obtained … directly or indirectly from the inventor”?

For example, does the “disclosure” or the “subject matter disclosed” have to be enabling (within the meaning of 35 USC Sec. 112) in comparison to the eventually “claimed invention”? Is a “public disclosure” of the “claimed invention” or of the “subject matter”, or “other”? And is the “public disclosure” the same thing as a “patent[]”, “printed publication”, a “public use”, a product “on sale”, or something “otherwise available to the public”? What is covered by the category of a disclosure “by another who obtained…indirectly from the inventor”? Does this cover illicit acts? Breaches of non-disclosure agreements?

It took the Supreme Court over 10 years to substantively rule on key sections of the 1952 Patent Act. If it takes over 10 years to get clear and final guidance on the questions above, inventors will be in a state of limbo until after 2022. This guarantees years of litigation and attorneys’ fees. A graceless mess indeed.
Posted by Unknown at 12:33 PM No comments:

As a general rule, with many exceptions that your patent attorney will have to research, do NOT rely on the existence of any foreign grace period.

Patent Laws' Fall from Grace-Part I: The Golden Age

For at least half a century, U.S. patent law provided a fairly clear one year grace period from public use of, or offer for sale of, a utility invention before a patent application on the invention was required to be filed. In other words, the inventor could publicly use and/or put the product for sale on the marketplace and not lose any domestic patent rights, so long as the patent application was filed within 365 days of the very first time the use was public or the product was offered for sale. The consequences for violating this grace period were lost of patent rights--the invention became dedicated to the public and free for all to use.
This strict grace period was enforced after-the-fact. The inventor was required to swear in a declaration, under penalty of Federal criminal law, that the inventor would disclose all material information to the patent office--public use or offers for sale more than year before filing the application being clear material information.
If the inventor didn't tell the patent office, no one was the wiser--until litigation erupted and the inventor tried to enforce the patent in an infringement suit. Then a well funded defendant with a competent legal team would investigate every nook and cranny, interview friends and relatives, and quite possibly turn up the undisclosed public use or offer for sale. The patent would likely be held invalid, and the inventor might even have to pay the defendant's gargantuan legal fees. Thus were the strictures of the one year grace period enforced.
That was then. The Leahy-Smith America Invents Act signed into law on September 16, 2011 changes all that, as discussed in the following posts.
Posted by Unknown at 12:08 PM No comments:

This blog is not legal advice. It is not intended to be legal advice, and should not be considered such. This blog does not apply law to any entity's unique situation. No one should rely on this blog in making any decision about their particular facts.